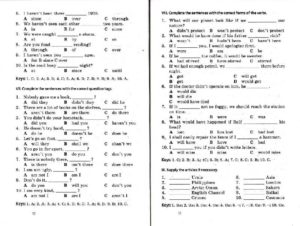 Listen to Matthew talking to his aunt about his friends. What hobby does each of Matthew’s friends enjoy? For questions 1–5, write a letter A–H next to each friend. There is an example for you. You will hear the conversation twice.

There are five gaps in the text below. Read it and decide which sentence A–E best fits each gap 6–10 in the text.

My father had a small house in Nottinghamshire. I was the third of five sons. When I was seventeen years old, I was sent to Mr. James Bates, a well-known doctor in London, with whom I worked and studied for four years.

When I left Mr. Bates, I began to work as a ship doctor on  the Swallow.

(6)______ After that I decided to stay in London. I bought a part of a small house and married Miss Mary Burton. But life in London was not easy.  (7)______. I spoke to my wife and some of my friends, and decided to become a ship doctor again.

I agreed to go with Captain William Prichard, who was making a voyage to the South Seas on board the Antelope. We started from Bristol on the 4th of May, 1699. (8)_____. But when we were sailing across the Indian Ocean, a terrible storm began which carried our ship to the east for many days.

Twelve of our sailors died of hard work and bad food, the others were ill. On the 5th of November which was the beginning of summer in those parts, our ship struck a rock.  (9)______ I cannot tell what became of my companions, and of those sailors who remained on the ship and on the rock, but I think that  they were all drowned.

I swam where the wind and the waves carried me.


I was very tired, but just when I could swim no more, I felt the bottom with my feet. (10)______ I walked a little inland, but didn’t see any houses or people. I lay on the grass, which was very short and soft, and slept more than nine hours.

Read the article about learning to snowboard. Choose the best word (A, B or C) for each space. For questions 11–18, mark A, B or C on your answer sheet. The first one is done for you.

Read the text and put the verbs in brackets 19–31 in the correct tense. The first one is done for you.

There are British English and American English words mixed up in the box below. Find the pairs of words 32–41 that mean the same. There is an example for you.

Imagine yesterday you arranged to go to the cinema with your friend. Unfortunately, you couldn’t get to the cinema as you had to take your pet to a vet.

Write an e-mail to your friend.

In your e-mail you should:greet your friend;apologize for not getting to the cinema;explain why you didn’t come;suggest meeting another time;

suggest where you could go.

Remember the rules of e-mail writing.

Transfer your answers to the answer sheet!

Listen to Matthew talking to his aunt about his friends. What hobby does each of Matthew’s friends enjoy? For questions 1 to 5, write a letter A to H next to each friend. You will hear the conversation twice. You have 20 seconds to look at the questions.

Now we are ready to start.

Woman: What’s your favourite hobby at the moment, Matthew?

Boy:  I don’t know, but Christina, she’s in my class, is in the mountains this week. She loves snowboarding.

Woman: That’s an exciting hobby! What about Jason, does he still enjoy drawing cartoons?

Boy:  It’s funny. He prefers being in the kitchen now! He loves making strange biscuits and things! Some of them taste terrible! Do you remember Tania?

Woman: Oh, the girl who played guitar at your party?

Boy:  That’s right. She spends hours practicing that.  She wants to be a real musician one day.

Woman: Mmm. And what about Steven? Isn’t he good at volleyball?

Boy:  No! He just loves sending messages to everyone on the computer.

Boy:  Molly’s always out on one of her  bikes somewhere. She’ll help repair them too. If you’ve got a problem, she’ll know what to do.

Woman: He must be very clever.

Now you have 20 seconds to fulfil the task.

(The recording is repeated)

Now you have 15 seconds to check your answers. 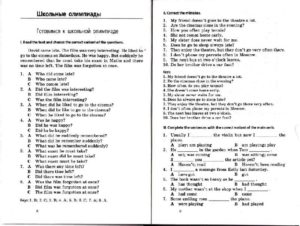 5. After school the students ….A) does homeworkB) do homework

6. In Britain there… three terms in a school year.A) areB) was

People often say that the lion is the symbol of strength. We say “strong as a lion”, or “lion-hearted”. Lions are members of the cat family. As a rule, a lion is about nine feet long and its weight is about 400 or 500 pounds. The lion’s voice is a roar or a growl.

Un other cats, it can swim in deep water. Lions to live in the open area and they don’t to live in forests. They drink once a day, that’s why they always live near some water. Lions may live alone or in pairs, or in groups which are known as “prides”.

Lions hunt at night and have a rest during the day.

Ответ на вопрос 5:
What’s the time?, или What time is it now? 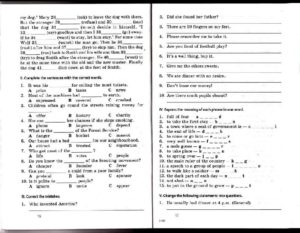 Read the text “Bill Gates” and say if the sentences are true or false (T / F).

Everyone has heard of Bill Gates, one of the richest and most successful people in the world. Microsoft, the business he started with a friend in 1975, has become the world's largest computer company, and Gates was the world's youngest billionaire at the age of 31.

He was born on 28th October, 1955, in Seattle, USA. At school, Bill soon showed that he was very intelligent, and especially good at Maths and Science.

His parents decided to send him to Lakeside, the private school where he first began to use computers.

13-year-old Bill Gates and his school friend Paul Allen were soon spending all their time writing programmes and learning about computers instead of doing their schoolwork!

After finishing school in 1973, Bill went to Harvard, America's most famous University. The next year, he and Paul Allen wrote an operating programme for the Altair, one of the world's first microcomputers.

The two friends started Microsoft in 1975, and Gates left Harvard. Since then, the company has continued to grow. One reason for his success is that Gates has always been very ambitious and hardworking.

In 1994 he married Melinda French, a Microsoft employee, and in 1995 he wrote a best-selling book, The Road Ahead.

“ I do my job,” he says. When he does find time to relax, he s puzzles, golf and reading about science. For such a rich person, his life is simple, and he spends little on himself and his family. Gates is very generous. He has already given huge amounts of money to charity.

I) Choose one word each time to make up English proverbs. Circle the correct answer.

II) Give the Russian equivalent of any five proverbs you and write it. Переведите (дайте русский эквивалент) любых пяти поговорок из задания (I).

a) watching b) watch c) watches

a) write b) wrote c) will write