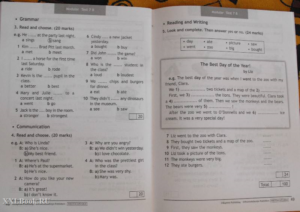 ! They have no feelings!
2 Why don’t you get a(n) … • broadband connection…..? You’ll be able to get on the Internet much faster than you do now.

3 I can’t send or receive anything over the Internet until I’ve set up my … • email account……
4 George didn’t have an Internet connection, so he checked his …. • phone line……..  to see if it was working.

5 Do you believe robots will ever be able to understand idioms or other parts of …. • figurative speech….
6 Scientists are working on creating a(n) …. • artificial brain……. which will make robots think on their own.

В Fill in the correct word. There are three words you do not need to use.
• caters • exists • discover • divided • invented • overcome • subscription • modem • perform • deletes • become • server • build
7 Some experts believe that robots with human intelligence will someday …..become……. a reality.

8 Did you know that there are robots which can …..perform…… tasks such as serving tea and vacuuming the carpets?
9 John cancelled his monthly ….subscription…… .to his Internet Service Provider because it was too expensive.
10 Experts are …..divided……..

as to whether robots will ever take the place of human teachers in the classroom.
11 Ben never goes anywhere without his laptop, as it ….. caters….. for all his business needs.
12 I don’t think that a machine that can think on its own …… exists……..

13 Timothy can’t connect to the Internet because his computer doesn’t have a(n) …. modem….
14 One of the problems robotics experts have to …. overcome….. when creating a household robot is getting it to understand and respond to everyday language.
15 Ben used recycled materials to ….. build…..


his robot for the science exhibition.
16 Andy has ….. invented….. a new gadget again; he really loves making things.

C Underline the correct verb form.
17 The lecture will have started/starts at 6 pm so we have plenty of time to get there.
18 Are you showing/Will you show me how to get free music downloads from the Internet?
19 Mark is really good with computers; I’m sure he is passing/will pass the IT test tomorrow.

20 This time next week, we’ll have attended/’ll be attending the technology exhibition in Boston.
21 The printer is making funny noises; it is going to break/will break down again.
22 By the end of the year, Eric will be working/will have been working on his new computer gadget for almost seven months.

23 Mr Higgins is giving/gives a demonstration of the new robot tomorrow evening.
24 By this time next month, we will have completed/will be completing our computer training course.
25 I am installing/will install the anti-virus software on your computer as soon as I get home tonight, I promise.

26 Do you buy/Are you buying Peter a new games console for his birthday?

D Choose the correct answer.
27 I will call you when I…… in London.
A will arrive В arrive C am arriving28 Bob rebooted his computer ……. the screen would stop freezing.

A in order В in case C so that

30 Richard is ….. hooked on the Internet that he even does all his shopping online.

A very В such C so

31 Christine saved her work on a disc ….. she would have an extra copy if something went wrong with her computer and she lost it.

A so that В so as C in order

32 The robots of the future will have ……….. amazing abilities that they will be able to do almost anything.

A such an В so C such

33 Anne called Frank ……… ask him about her computer problem.

34 I will not download the file ………… I’ve installed anti-virus software.

A by the time В until C while

35 Daniel bought a used computer…………spend all of his savings.